Stories from my past, Uncategorized 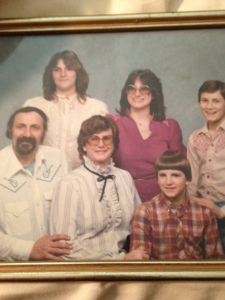 On this day, August 20, 1943, a wonderful man entered this world.  His name was Michael and he was my father.  I would like to share a little about my father.

My dad was a pretty big Italian guy.  He had the typical darker Italian skin coloring and very dark/black hair.  He was a natural athlete until he damaged his knee in baseball.  That injury stole away his dream of being a ballplayer on a “farm” team that he had been scouted for.  It also kept him out of the Military draft for the Vietnam war.

Dad was a typical James Dean dude with the black leather and smoke hanging out of his mouth.  He met my mother in high school who was your typical June Cleaver type girl.  I picture the story as good girl attracted to bad boy although my mother denies that.  They married after high school.

My sister was born in 1963, me in 1966, brother in 1969 and youngest brother in 1971 (he was a surprise).  We lived in a small house in an area on the Island that was built during the war years so the houses were all pretty similar and close together. My dad worked a job that took him out of town often and I remember being little and waiting for him to come home.  He would always bring us kids a treat and usually they were the colored candy coated almonds he would pick up from the airport.  It was a very special treat.

The traveling was hard on my mother and my father decided it best to leave the job and look for something where he would be home more often.  He took a job in a flooring company.  The company was based in a house with a small warehouse in back.  Dad would often bring us kids along and we would pretend work at the desks and he would give us rides on the fork lift. It was such a great time.  We bought the house I am raising my family in now in 1972.  It was a dream to have land, own a horse and live off what we could farm.  And then the company closed.  That was a tough hit to take.

Dad decided to start his own carpet/floor cleaning business.  We had the coolest vans loaded with his equipment and sometimes we would empty the vans and take them camping.  It was so fun to sit in the back on the floor (it had no seats or seat belts) and play cards or games while driving to our destinations.  The business was hard and the work had to be done in businesses mainly at night so dad would leave when we were going to bed and come home in the wee hours.  That made it hard for him to be up early to get to other jobs at residential homes.  Because my mother had us kids she could not work.  She had 2 younger sisters who would have been able to babysit us, however they would not drive over the bridges to get to the Island.  So we struggled along with what dad was making.

I had bad allergies as a child and finally after being sick for a long time my parents spoke to the pediatrician who lived on the Island.  It was decided I needed allergy shots.  My dad cleaned the pediatricians office, home carpets and floors in exchange for my treatment.  This took away from his actual money earning business but it was not a choice.

My parents were (mother still is) devout Christians.  We are Catholic but my parents took us to many non-denominational churches, services, expos etc.  We have been at very traditional churches and ones where there’s heavy metal Christan bands.  There were times we were very low on money and our church would drop of bags off groceries to us.  It was a very humbling experience. As kids it was exciting too as we ripped through the bags to see what treats were in store for us.

The business was eeking along and with my allergies and my first brother showing signs of following suit, it was decided my mother had to go to work to obtain health insurance for us.  My dad worked his schedule around being home shortly after we would get home from school.  My sister and I helped with cooking our dinners so when my mother would get home at 5:00 we would be able to eat and head to whatever activities we had (swim practice, dance, football etc).

This lasted a few years until my father realized it was getting harder to get jobs cleaning and working late into the night and staying up for us and sleeping from 5 until he left again at 11:00 p.m. so he sold the business and went into management positions at furniture stores and an electronics store.

My parents decided to move to Florida in 1992.  The house we grew up in had been “patched” as best as they could to keep it in shape but it was rough.  I decided to sell the house I had bought by myself when I was 24 so I could move into theirs and work on fixing it up to sell for them.  I started little projects soon after they moved widdling away at my savings and working 3 jobs so we would be able to get the most out of it to put towards their retirement.

In 1997 after fixing what I was able to over the years and updating it, it was market ready.  It was listed and sold to a family who wanted to put a dog kennel on the property.  I began looking for a new house and while working my 2nd job as a waitress at night I met the golf pro at the golf course I worked at.  We began chatting and he said he was looking for a fixer upper house on the Island where the course was.  I told him I had just sold a house like that.

In a twist of fate, the golf pro and I hit it off very well and ended relationships we were both in to begin dating.  At the same time, the deal fell through on the sale of my parents home as our local town would not approve the permit for a dog kennel on the land.  The house fell back onto me and the golf pro man and I decided to keep it and fix it up.  In 1999 we bought it from my parents and began making it our dream home where we are raising our children today.  My father was very pleased to keep this property in our family.  He always looked forward to helping us work on projects when he would visit a few times a year. 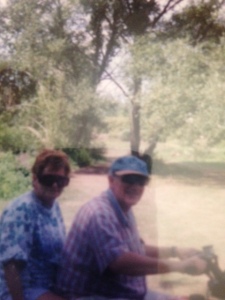 Dad and Mom checking out the fencing on pastures

My dad and I had a very special bond.  I was a “wild child” and very rebellious but also fun loving and harboring many of the traits my father had.  He was a very wise man who people were drawn to.  He counseled many people from teens to adults during his years as a football coach, baseball coach, religious education teacher, and jail ministry.  He had a voice like Elvis and played guitar like the best of them.  He would play guitar almost every day singing for us and for anyone who wanted to listen.  You WANTED to be around him.  He was uncomplicated and knew how to figure life out.  I am told I inherited this from him as well.

My father’s company picnic with me and my nephew along

In 2001, the same month I found out I was pregnant with my first child, my father was diagnosed with esophageal cancer.  I remember begging God not to give me a life and take one from me at the same time.  My daughter was born in May 2002 and dad died on August 24, 2002 surrounded by his family.

This was the last picture of my father a little less than 2 months before he died. He was able to meet our daughter

So today on his birthday I will take time to talk to my kids about their grandpa they did not get to know.  I will share his story so the whole world knows what a great man was born on this date.

Happy Birthday Dad!!  We miss and love you!!

4 thoughts on “A Great Man”